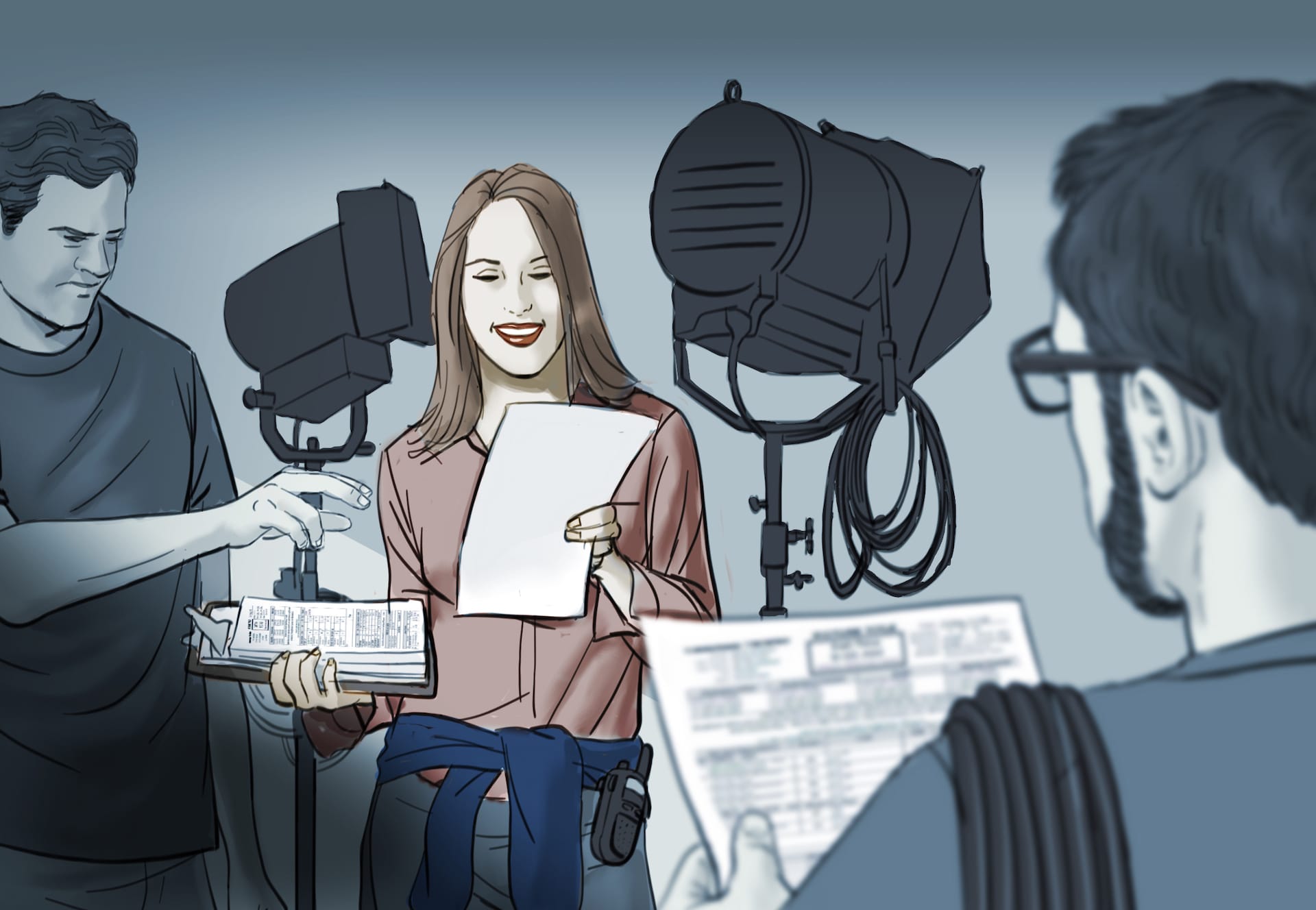 This article breaks down the role of the 2nd Assistant Director and how film call sheets are made. (A professional call sheet example is included as well.)

The call sheet is a film’s master plan for every shooting day. Without it, a film crew would be shooting blindly, unable to correctly plan, and communicate with one another.

The call sheet is usually given to the crew the day before shooting begins (usually right after wrap the day before). On it is listed essential details such as a shooting schedule and contact numbers. Most importantly it lets everyone know when and where they are needed during production.

Film sets are often fast-moving and fluid environments: scripts and schedules can sometimes change daily. That is why updating call sheets is so vitally important if you want a well-organized film set. It’s the main task of the 2nd Assistant Director (2nd AD) to create, update, and distribute the call sheet. Below we are going to breakdown this important job role and then analyze a professional call sheet example.

What is a Call Sheet?

The call sheet, also known as the daily call sheet, is handed out to all crew and cast members at the end of every shooting day. It contains key information for the next day of filming such as the call times, location addresses, parking instructions, a brief schedule, and much much more. Simply put, a call sheet is the main point of communication for everyone working on set.

This document is traditionally a single piece of paper, printed on the front and back with the information. But these days, call sheets are also frequently sent out digitally via email or SMS text message as well as distributed in print. The printed call sheet will be handed out by a production assistant or by the 2nd assistant director themselves.

Because films are also very rarely shot in sequence, schedules can change instantly based on unpredictable factors. For example, the actor’s availability, the weather, a new scene added. Because of this a new call sheet is planned, prepared, and sent every day usually 12-24 hours before shooting begins. When the schedule changes after the call sheet has already been published, a new revision of the call sheets is made which is then printed on different colored paper according to the industry standard color revision list.

With a tool like SetHero, you can build your call sheet and publish it via both email and text. You are also able to track and confirm who has viewed your call sheet before filming begins. This is especially helpful if you have a large set where communication is crucial. See features >>

Who Makes the Call Sheet?

The 2nd AD is the right-hand assistant to the 1st Assistant Director. Running a film set is a combined team effort between them both. The 2nd AD communicates information from the production office to the 1st AD on the set. The AD department is responsible for coordinating all of the production activities and supervising the cast and crew. 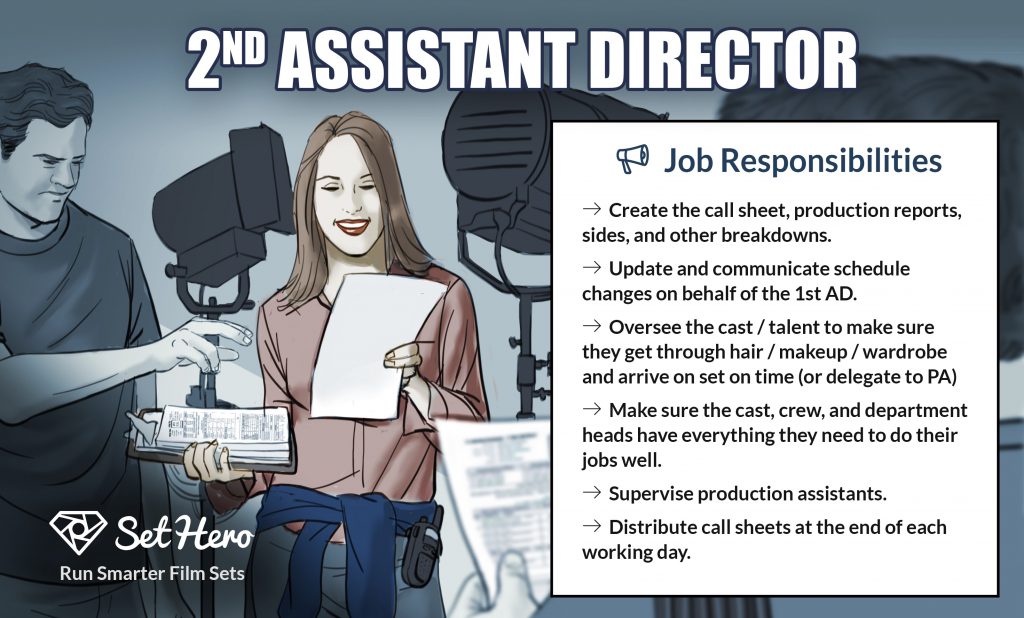 If there is one singular responsibility of the 2nd AD, it would be the call sheet.  However, there are many other tasks and paperwork a 2nd AD needs to complete as well. Here is a brief breakdown of their main job responsibilities:

Alright, let’s step into the shoes of a 2nd AD for a typical day on set.

When your day begins, you will often oversee the actor prep process to ensure the talent is in hair and makeup on time. You want to ensure that all department heads have everything they need to do their jobs correctly and that the day has gotten off to a smooth start. Once the talent is on set and filming has begun, you can breathe a BIG sigh of relief.

After that, the main portion of your day as a 2nd AD will be spent in the production office prepping, organizing, and supervising paperwork and handling communication. It’s your job to ensure that all paperwork is accurate and to communicate with team members who have reached out with questions via phone call, email, or text. You are the main contact person for the crew, cast, and stand-ins, since YOU are the one with full knowledge of when and where these people are supposed to be throughout the shooting week.

At the end of each day, it’s your job to email and distribute the call sheet to all cast and crew. Ideally, you (or a designated PA) will be on set with printed copies of the next day’s call sheet ready to hand out as soon as “wrap” is called.

Recently, modern production management software has made this process easier by allowing you can see who has viewed the digital call sheet and who has clicked the “confirm” button. This saves you a lot of time at the end of the day and reduces the number of phone calls you need to make. (A tool like SetHero includes this feature for all users)

On smaller film sets, 2nd ADs will complete all of these tasks themselves. However, on larger film sets (especially those that are part of film unions), there might be several 2nd Assistant Directors (depending on the scale of the production). Out of these 2nd AD’s, there will be a Key 2nd Assistant Director who will be primarily responsible for call sheet creation; other tasks may be delegated to the remaining 2nd ADs or to production assistants.

How is a Call Sheet Created? 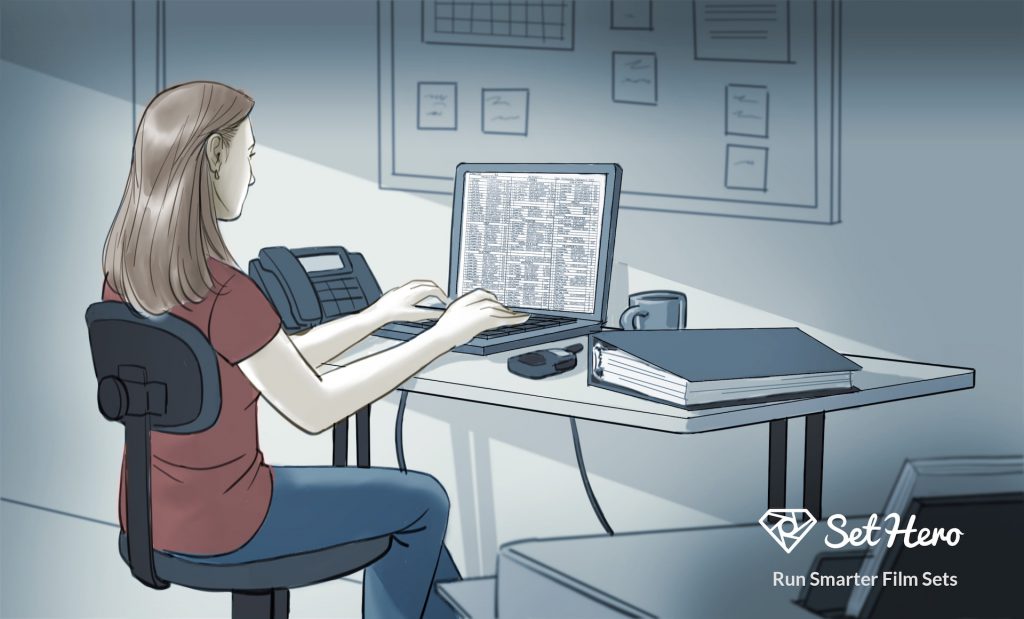 Before you create your call sheet you will need to complete a script breakdown. A script breakdown involves listing all of the scenes in your script and their elements. These elements cover every visual in the scene that you need to find before filming can begin. For example, locations, actors, costumes, props, and special effects.

Once these elements have been sourced, you can prepare an initial shooting schedule. This is typically created by the 1st AD and the assistant director team. When the shooting schedule has been approved, the first call sheet can be created. The 2nd AD will create the call sheet and have it approved by the 1st AD and other department heads. This will include approval by the director, director of photography, production manager and line producer.

The call sheet can be changed and customized for each production. The call sheet example given below was carefully crafted in collaboration with film professionals. On the front page of a call sheet are the most important details, the back lists additional information. Let’s breakdown the key elements of a typical call sheet’s front and back structure. 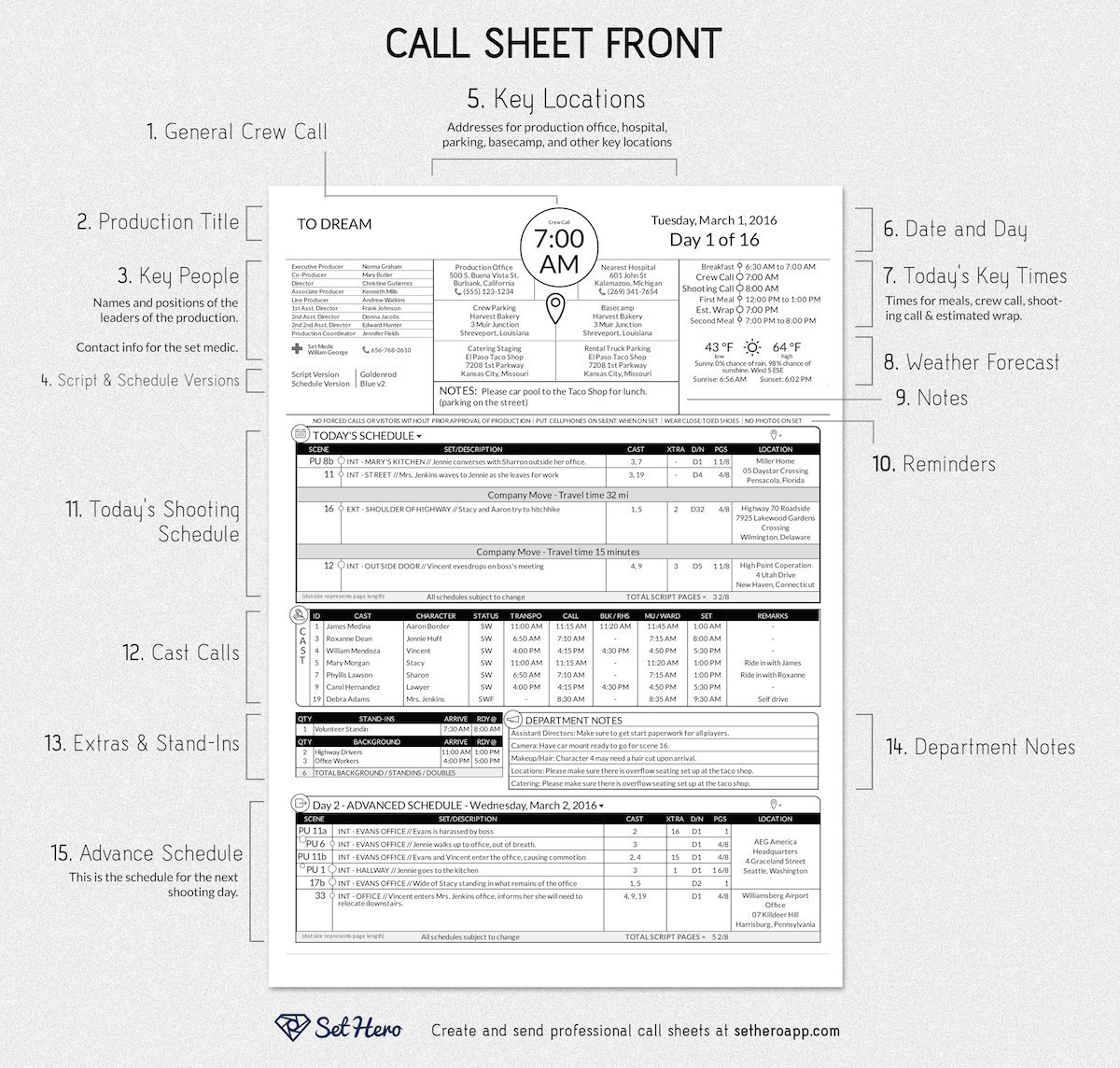 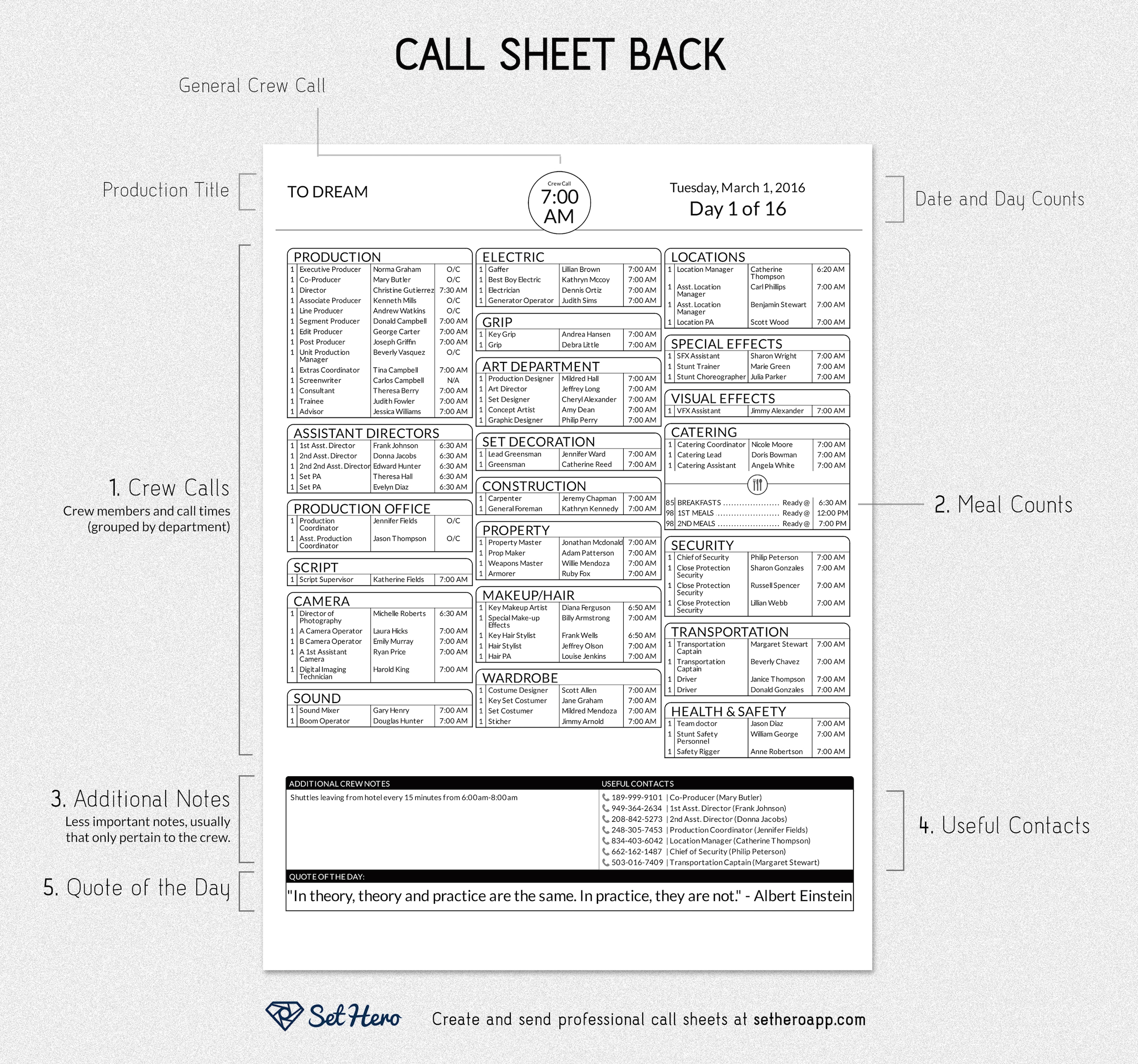 You can download a free call sheet template by completing the form below: 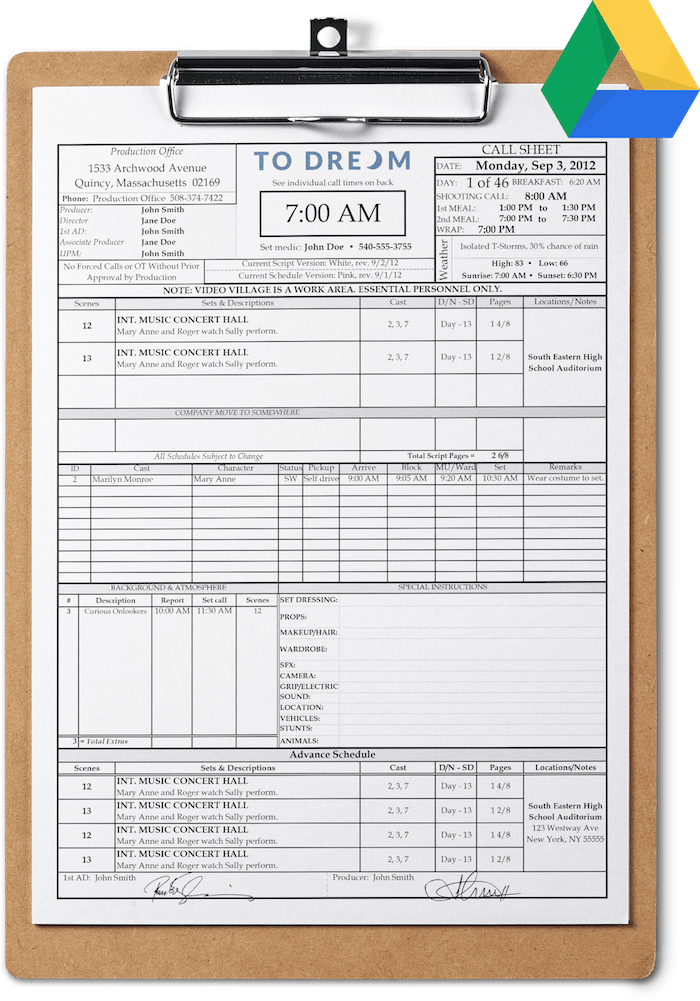 Advice For The 2nd AD

If you are an aspiring 2nd assistant director, the best way to learn is to get in the production office. Many 2nd AD’s simply worked their way up the production team ladder by starting as production assistants. The 2nd AD role is highly organized, so you will also need to develop strong leadership and interpersonal skills. To help create schedules, you might use scheduling programs such as Movie Magic Software or Think Crew.

Other skills that could be helpful to a 2nd AD are walkie talkie knowledge, on set experience, and first aid training (especially if the 2nd AD wishes to move to the 1st AD job role, although this is not a requirement.) You will also need to learn to delegate your responsibilities to production assistants and interns. On professional film sets, you will have a team of assistants but on smaller independent sets, you will likely be wearing many hats (you may even need to assist the 1st AD on set if they require the extra help!)

Being a 2nd Assistant Director involves organizing a lot of moving parts and working with many different people. It’s an exciting job that requires very high levels of both interpersonal communication skills as well as organizational and paperwork skills. When done well, the 2nd AD is often a beloved and indispensable member of the crew that everyone counts on to know the plan of action and keep the ball rolling forward. 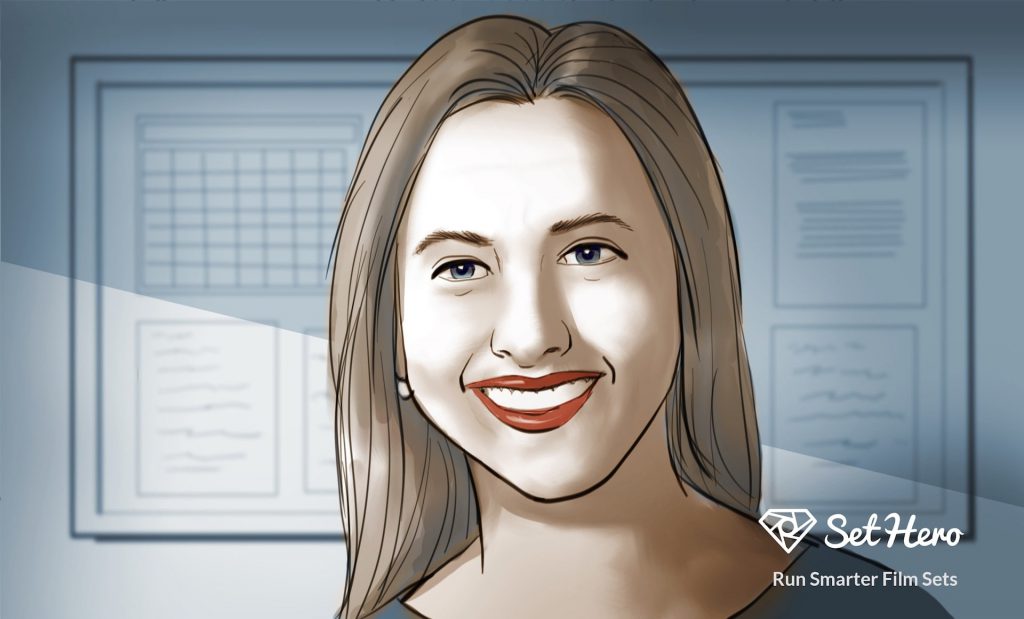 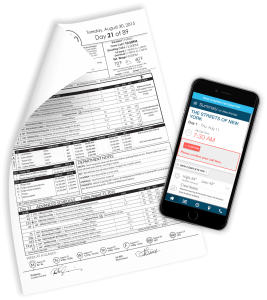 With SetHero, you can build a customized call sheet that you can easily distribute to your whole crew. Unlike other call sheet platforms, SetHero allows you to publish via email and text. You can also track who has viewed your call sheet with our unique confirmation options. See all features >>